In 2022, the interior renovation of the basement and entrance floor of Billdals Gård will begin. In the house, Higab has arranged a small exhibition in one of the rooms to show how we will implement the renovation and conduct building maintenance. The exhibition is not open for the moment, but here you find texts and pictures. 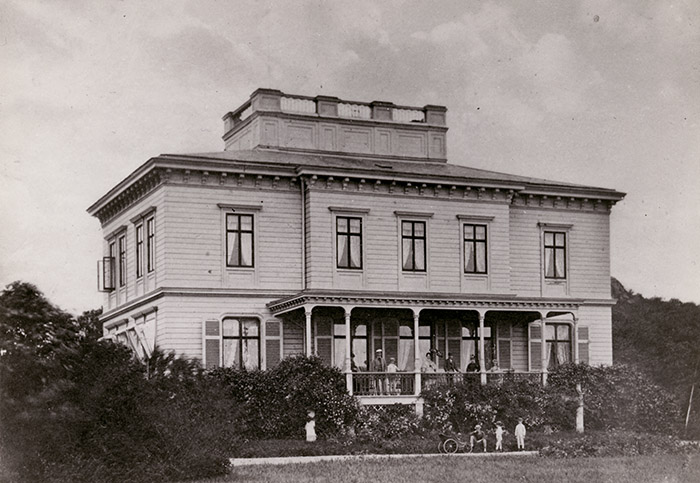 In 1862, James R Dickson, a wholesaler and municipal politician, purchased the farms of Billdal Västergård and Östergård. Some time during the same decade, an older farmhouse on the property was demolished and replaced with the building you are standing in today. The architect was Frans Jacob Heilborn and the building constructor was August Krüger.

When James R Dickson died, in 1873, August Krüger took over the property and sold the building to a merchant, Charles Felix Lindbergh. He lived in the house all year round and owned it until his death in 1909. The property was then taken over by industrialist Gustaf Werner, who acquired some adjoining land, modernised the house and added new outbuildings, including a laundry, workers’ dwellings and greenhouse. 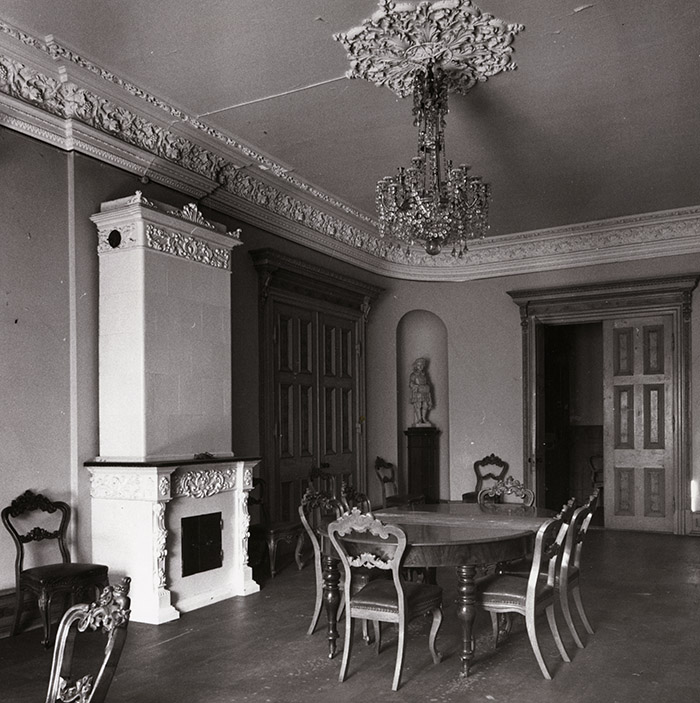 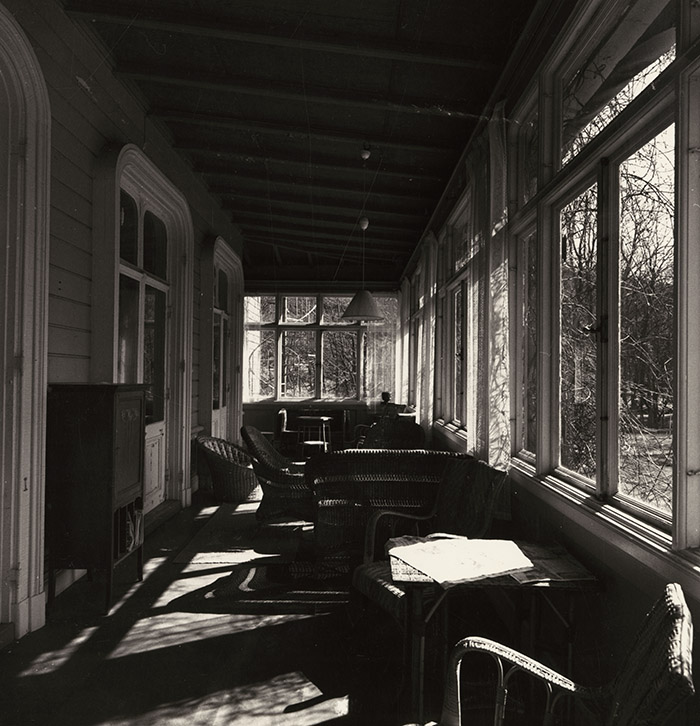 After his death Werner’s relatives looked after the building until the entire property was bought by the municipality of Gothenburg in 1963. The existing tenant was granted tenancy until his death, which occurred in 2001. The furniture belonged to the family and was removed from the house, but the interior photos alongside show how it looked when it was furnished.

The main building remained empty until 2014, when Higab began the exterior renovation of Billdals Gård.

The three owners who put their stamp on Billdals Gård had a lot in common. They were all influential businessmen in Gothenburg society and donated large sums to charitable causes. All three also remained unmarried.

James Robertson Dickson (1810–1873) was the son of Robert Dickson, one of the Dickson brothers who came to Gothenburg from Scotland in the early 1800s to run businesses. The family firm of James Dickson & Co was successful and the family became very wealthy and influential. James R made donations to the Dicksonska Folkbiblioteket (a public library), the Robert Dickson foundation and Gothenburg’s museums. He also gained a less flattering reputation when the family firm was accused of illegally felling government-owned forest in northern Sweden, during the Baggböle trials “Baggböleri” has since become a familiar term for deforestation or illegal logging.

Charles Felix Lindbergh (1840–1909) was also a merchant and philanthropist. When he died he left a fortune of more than SEK 2 million, which he donated to the City of Gothenburg “for the ornamentation and beautification of the city”. Grants from his foundation were used to create the park around Skansen Kronan and Gothenburg Botanical Garden, among other things. Monuments such as Poseidon in Götaplatsen, the statue of Karin Boye outside the City Library, and Järntorgsbrunnen (the Five Continents), were also erected through donations from the foundation.

Gustaf Werner (1859–1948) was a businessman in the textile industry who had a number of factories in locations such as Gårda and Mölndal, and like the other owners of Billdals Gård made large donations to good causes. In addition to Billdals Gård, his donations included significant contributions to Gothenburg Museum of Art and the construction of Gothenburg City Theatre. He also donated Wernerska Villan and an impressive art collection to the City of Gothenburg on his death.

When Dickson’s summer residence was built in the 1860s, architecture was heavily influenced by the neo-Renaissance style, which placed strong emphasis on order and symmetry. One clear example is that several rooms have dummy doors – a genuine door at one end of the room is balanced by a matching door at the other end, which does not open. The intent was to create an impression of harmony and repetition. The exterior also reflects this classical style with its elegant, symmetrical design.

This symmetry is broken by the entrance and stairway, which are oriented diagonally within the house. This is a result of the new English guidelines for building design of that time, which favoured privacy and convenience, and ensured there would be no walk-through rooms in the house. A centrally located entrance hall gives access to the various parts of the house. 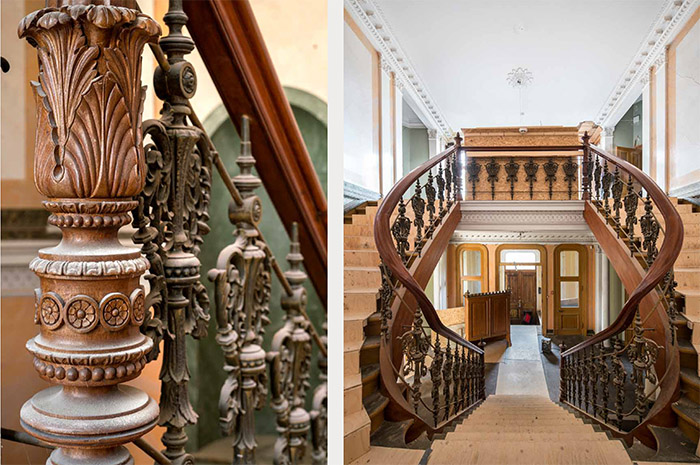 The central hall has a double staircase.

A well-preserved and well-worn interior

Billdals Gård has an exceptionally well-preserved interior and the original floor plan has not been altered. Decorative features and fittings such as doors, floors, cabinets, kitchen fittings and tiled stoves have all been preserved. Each room was given a character of its own through the use of different styles, types of wood, decorative painting, carpentry and ornate plasterwork.

Several of the walls are plastered and have been repainted over the years, but in many ways the colour scheme is traditional. There are probably traces of the original colour scheme underneath the present layers of paint. All the interior fittings and decoration at Billdals Gård are extravagant and reflect the highest quality of craftsmanship.

The interior of the old summer residence is now very worn. By renovating with materials and techniques that are typical of the 1860s, when the house was built, we can preserve as much of its character and heritage value as possible.

The approach to renovating Billdals Gård is to save and reuse as much as possible. Sometimes, however, it is necessary to reconstruct parts that cannot be repaired. This work is entrusted to paint conservators, plasterers, painters and carpenters who are skilled in traditional techniques. 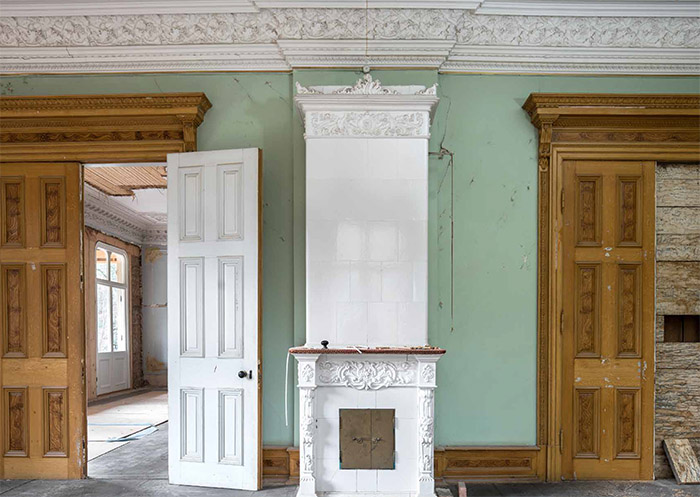 The old dining room is in need of care. In this photo you see an example of the symmetrical design: a genuine door on the left is balanced by a dummy door on the right.

The walls and ceilings are smooth plastered using lime plaster. The plaster is supported on diagonal wooden laths and reed matting. You can see the different layers in areas of the ceiling that have been exposed during repairs.

In the 1860s, plaster cornices and roof rosettes were made from ground gypsum, glue and water, sometimes mixed with other materials such as marble dust. Decorative plasterwork became very popular during the 19th century, but has been around since ancient times and in Sweden since the 16th century. The white decorative plasterwork we are used to seeing in older houses today has often been over-painted; in the 19th century it was often colourfully painted. 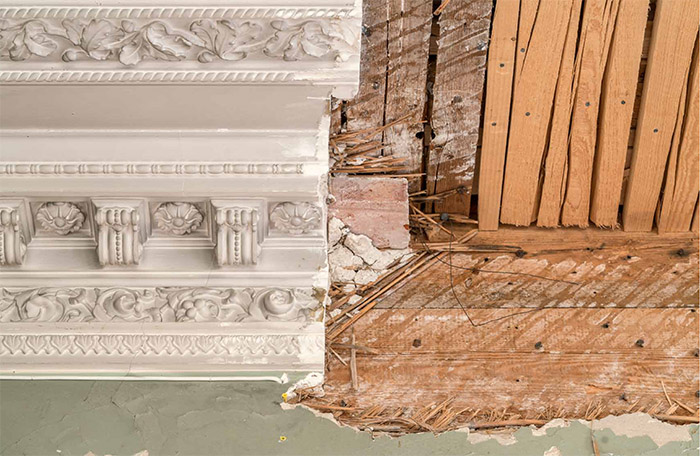 The different layers of the ceiling; wooden laths, reed matting and the top layer with the decorated plastered surface.

How walls and ceilings are restored:

All the rooms have untreated pine floors that are neither painted nor varnished. Although some rooms are up to eight metres long, there are no joints in the floorboards. Over the years, several floors in the house were covered with linoleum flooring. This may look out of place to us now, and some of this flooring will probably be removed, depending on its condition and how it fits with the style of the house. But it is these floor coverings that have saved the fine original wooden floors.

The floors that remain will be preserved and treated with care. Sometimes all it takes is scrubbing with soap to make the floors look like new. In rooms where floors are missing or damaged, they must be repaired or replaced with planed pine boards. Eight-metre-long floorboards are not available off the shelf today; like most things in Billdals Gård they will have to be specially manufactured. 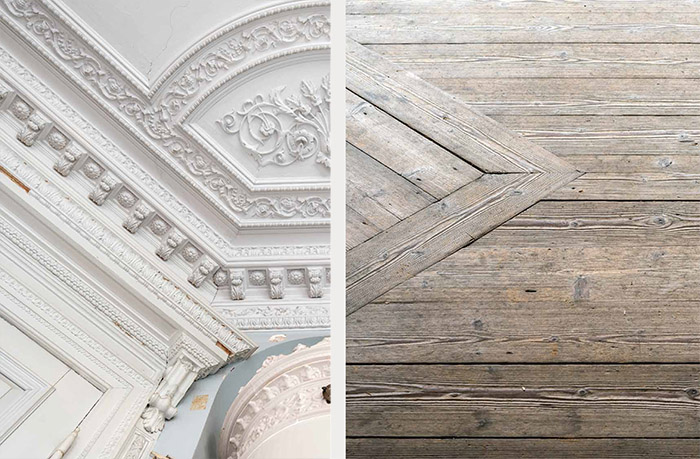 Details of the decorative plasterwork in the ceiling and the beautiful pine floor.

Everything is not what it seems to be …

In most of the rooms, interior fittings such as skirting boards, lining, wall panels and doors have been painted in wood grain patterns that imitate various types of wood and contribute to the individual character of the rooms. The painted wood graining in Billdals Gård is intended to mimic oak, speckled maple or flame birch, for example. Another technique used is marbling, in which a surface is painted to resemble marble.

When wood-grained surfaces are renovated it is sometimes possible to enlist conservators to restore flaking paint and retouch smaller areas of damage. When it comes to major restoration, where wood-grained paint is very damaged or has even been over-painted, decorative painters are enlisted to improve or recreate the original painted finish.

The marble-like walls of the entrance hall were in fact finished using a plaster and paint technique known as stucco lustro. This technique dates from Roman times and uses a mix of lime, soap and water that is polished to a fine finish. The surface can then be painted, for example using a marbling technique, as here at Billdals Gård where the walls of the entrance hall appear to be clad in marble. 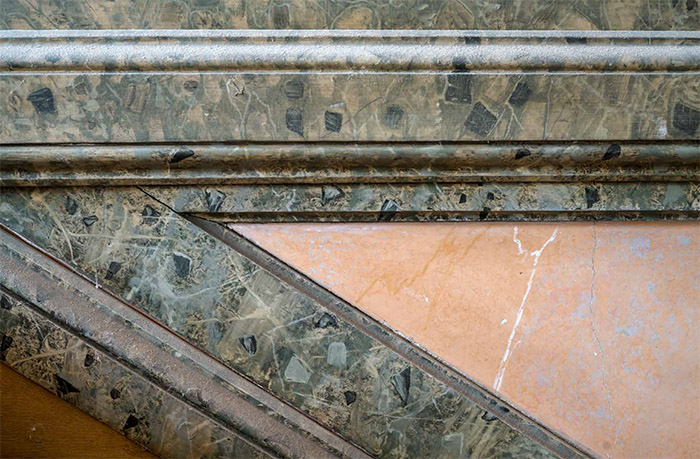 What looks like marble is in fact stucco lustro – a mix of lime, soap and water that has been polished and painted with marbling technique.

The tiled stoves and the huge wood-burning cast iron stove in the kitchen cannot be used at present. To create an authentic setting without creating a fire hazard the stoves must be renovated or, in the case of those that have been dismantled, they must be rebuilt. Even so, it would not be possible to light the stoves at the moment as the chimneys are likely to require major renovation first.

The large wood-burning cast-iron stove has been stripped of rust using a wire brush and treated with black iron paste to fill cracks and restore its black finish. 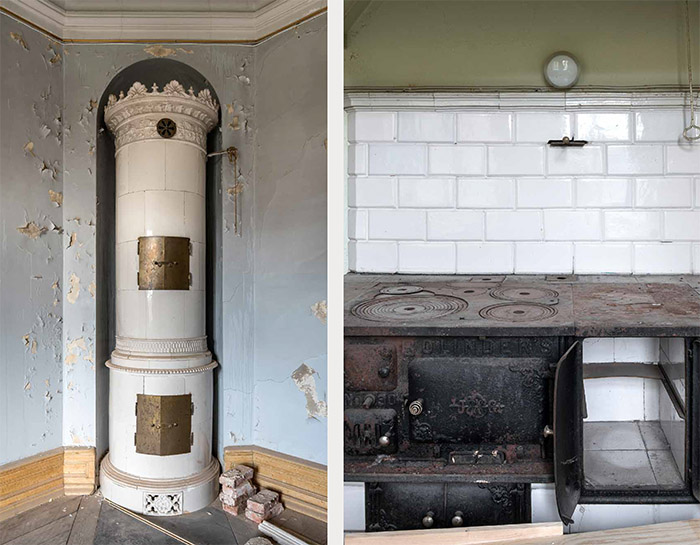 One of several tiled stoves in the house. To the right the big iron stove in the kitchen.

The archive photos are from the collections of the Gothenburg City Museum. Other photos: Higab/Hans Wretling.